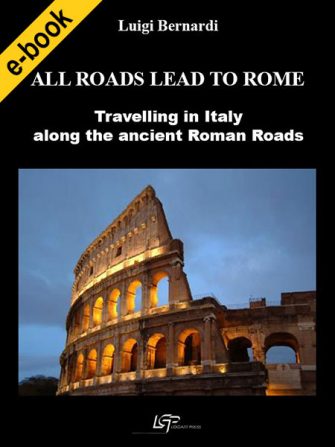 ALL ROADS LEAD TO ROME

All roads lead to Rome

The best guide to visit Italy in a different and most interesting way! From Southern Italy – Apulia, Naples on to Rome, Florence and the North of Italy, all the way up to Monte Carlo. Travelling in Italy along the old Roman roads built by Consuls and Emperors centuries ago, spreading knowledge, law, language, art, civilization and above all, uniting Italy and Europe. A fascinating itinerary full of historical memories, places where to stop, monuments to see, archaeological sites to visit whilst driving across the oldest, largest and most efficient road network still in use to day. “A sitting legionary is a lost legionary,” as the Emperor Octavian Augustus used to say. He feared that once the internai and external opponents were routed, the sudden and unusual peace would weaken the conquering soldiers worldwide. From the Iberian Peninsula to Asia Minor, from Britannia to the Sahara, the Roman eagles had brought peace with war. The repose did not suit the warriors, at least that is what the Emperor thought. Once the swords were deposed, the soldiers were made to transport stones, place them in the ground and thereby pavé the roads. A wise decision. In fact, an efficient method of road linkage was an indispensable way to control the largest Empire in ancient times. Actually the ancient Romans had known for centuries that roads were both a sword and an outstretched hand to other populations. For this reason, already during the Republican period, roads were built.They wanted roads in the entire Empire that lasted aere perennius, that is longer than bronze. And perennial they have demonstrated to be, because even today they are used by the masses.